Capoeira is an Afro-Brazilian martial art developed in the 1500s by African and Indigenous slaves in Brazil as a form of self-defence from their oppressors. It is marked by its agile and tricky movements that may be executed anywhere from an upside-down position, to a gravity defying kick. It has a strong acrobatic component in some styles and is always played with music. The word Capoeira is an indiginous word meaning ‘tall grass’. If slaves managed to escape, they would often use this grass to hide in and ambush their masters.

There are two main styles of Capoeira, along with many other less distinct ones. One is called Angola, which is characterized by tricky, low play with particular attention to the rituals and tradition of Capoeira. This style is often described as slow, however, may be just as fast as the next style, but with different rituals. The other style is Regional, known for its fluid acrobatic, high-flying kicks and powerful attacks. Speed and agility are common traits of this style. Both styles of Capoeira are marked by counter attacks, feints, and use lots of ground movements along with elbows, hands, kicks, head-butts, sweep and other take-downs.

During the 1500s, Portugal shipped slaves into Brazil from Western Africa. Brazil was the largest contributor to slave migration with 42% of all slaves shipped across the Atlantic, a number totalling roughy 4.5 million people. The following peoples were the most commonly sold into Brazil: Sudanese, Guinean, Angolan, Congolese, and Mozambiquian.

The homogenization of the African people under the oppression of slavery was the catalyst for Capoeira. Capoeira was developed by the slaves of Brazil as a way to resist their oppressors, secretly practice their art, transmit their culture, and lift their spirits. There is also substantial evidence that indigenous peoples of Brazil played an important role in the development of Capoeira. Batuque and Maculele are other fight-dances closely connected to Capoeira.

After a long period of punishment for practicing Capoeira, in 1937, Mestre Bimba was invited to demonstrate his art in front of the president. After this performance, Capoeira became legally tolerated, and in 1953 it was completely legalized. Mestre Bimba is a critical historical figure for capoeira for many reasons, including being the person to open the first official Capoeira school in Brazil.

Since 2008, Capoeira has been officially recognized as a national sport, and has spread around the world.

Music is integral to Capoeira. It sets the tempo and style of game that is to be played within the Roda. The music is comprised of instruments and songs. The tempos differ from very slow to very fast. Capoeiristas sing about a wide variety of subjects. Some songs are about history or stories of famous capoeiristas. Other songs attempt to inspire players to play better. Capoeiristas change their playing style significantly as the songs or rhythm from the Berimbau commands. In this manner, it is truly the music that drives capoeira. 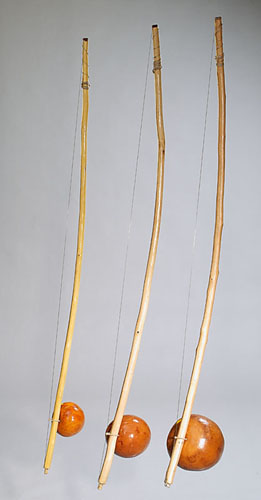 There are three basic kinds of songs in Capoeira. ladainhas (litany), which are narrative solo songs, usually sung at the beginning of a roda, often by the Mestre (a teacher). These ladainhas will often be famous songs previously written by a Mestre, or they may be improvised on the spot. Quadras, which are another form of narrative song that are broken down into into multiple verses.thirdly, corridos, which are songs that are sung while a game is being played, following the call and response pattern.

The instruments are played in a row called the bateria. The first three instruments are Berimbaus, which look like an archer’s bow using a steel string and a gourd for resonation. These three Berimbaus are the Gunga (also called the Berraboi), Medio, & Viola (or violinha), in sequence from right to left represented in the image above. Other instruments in the bateria are: Pandeiro (tambourines), and the Atabaque (conga-like drum). Sometimes an Agogo (cowbells) and a Reco-reco (rasp) are used, particularly in the Angola style of Capoeira.